I have been on a roll today since this will be wedding blog number 5 today! I am still trying my best to update all my photo adventures as fast as possible. This blog entry about an engagement photo session in Los Angeles will definitely be a real treat! One of my favorite couples, Sandra and Holger , is finally back in LA for their next crazy themed photo shoot. During their last visit, we visited March Airfield in Riverside for their “Vintage WW2” themed engagement photo session. This time, they have decided to stay in Downtown Los Angeles and spin off with the theme of “umbrellas” in this photo shoot. Either way, these two want their engagement photos here in LA to be as edgy as possible. I will let you viewers be the judges if we managed to pull this photo shoot off!

I am not sure if it is bad luck or just sheer coincidence that every time we photograph with Sandra and Holger, it is the hottest day of the year! The “Vintage WW2” themed photo shoot at March Airfield was about 110 degrees and this time around in Downtown Los Angeles, it peaked at 111 degrees! I suppose the umbrellas definitely came in handy when we walked from one location to another during their engagement photography session. With the scorching heat, we had to make frequent pit stops indoors and under bridges just to cool ourselves down. Overall, the edgy pictures produced from this engagement photo session were all worthwhile. Enjoy the show! 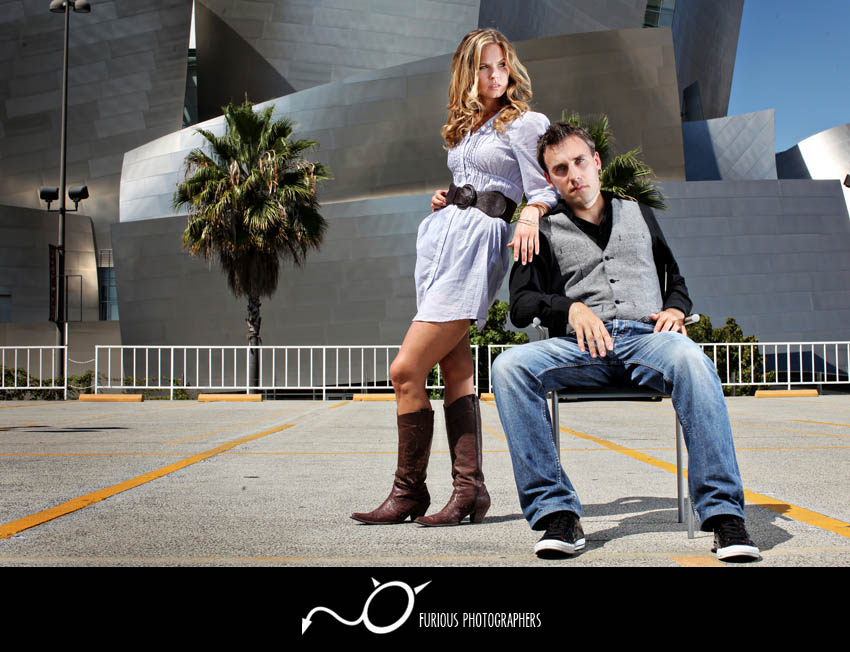 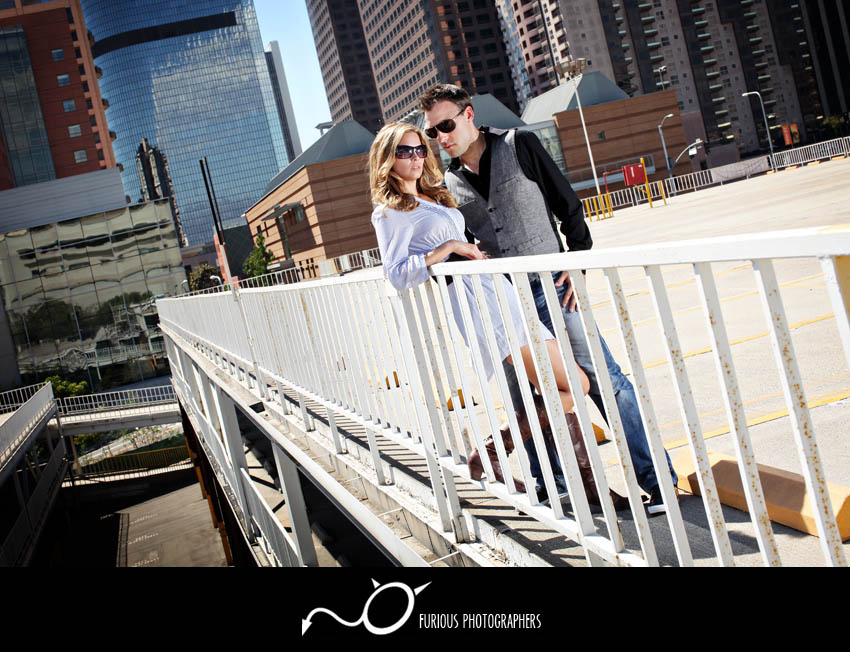 After we had our fill of Disney Concert Hall as our backdrop, we drove under Grand for some nice perspective shots. 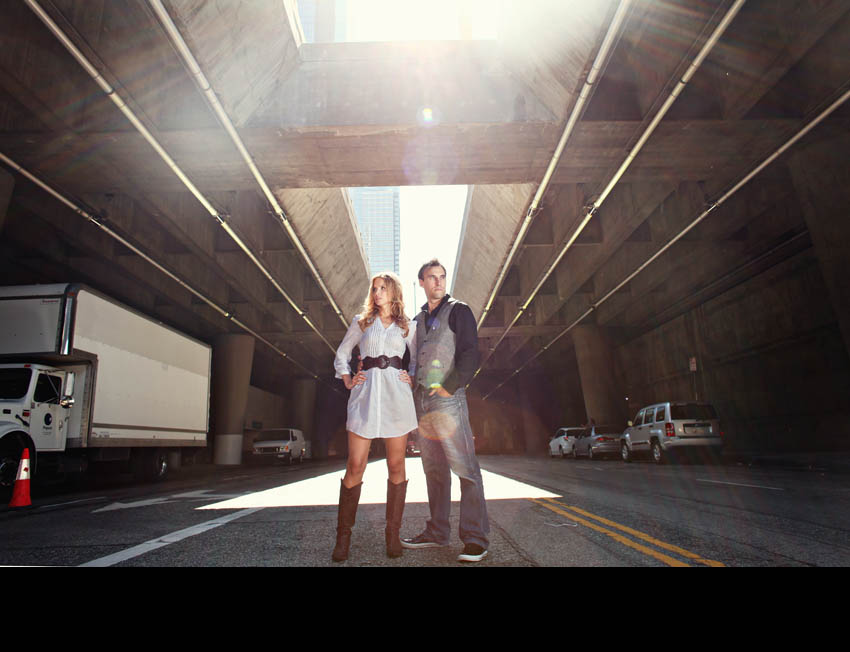 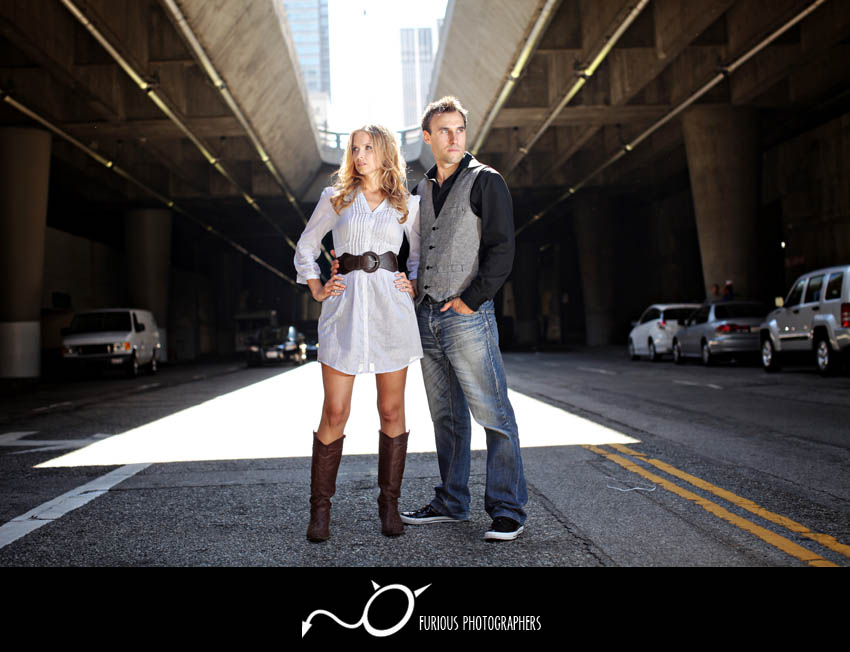 When we had enough vitamin D for the time being, we took refuge at Bradbury Building and its abundance of central air that flowed throughout the building. The guards were gracious enough to allow us to photograph in their lobby too!

Here is another historic location here in Downtown Los Angeles. We thought it would be a sweet addition for Sandra and Holger’s photos.

After the sun settled down a bit, it was perfect timing to start setting up the real photo shoot! With the strobes all calibrated and the umbrellas nicely positioned, we snapped away and pulled out the following edgy photographs! I think the turquoise and violet parasols in the following engagement pictures complimented Sandra and Holger’s attire quite nicely. 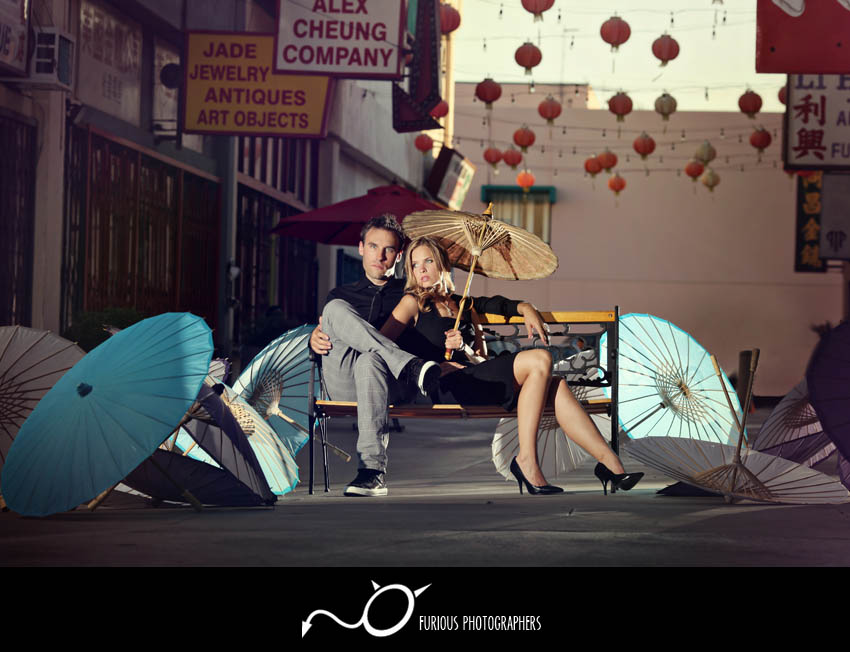 The black and white photograph below is a very classy picture taken by Phebe. 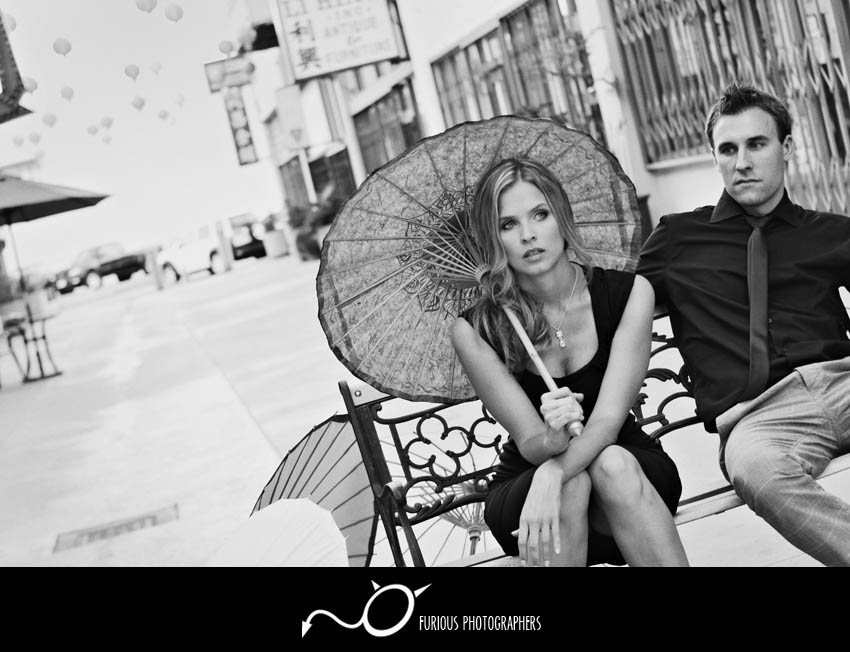 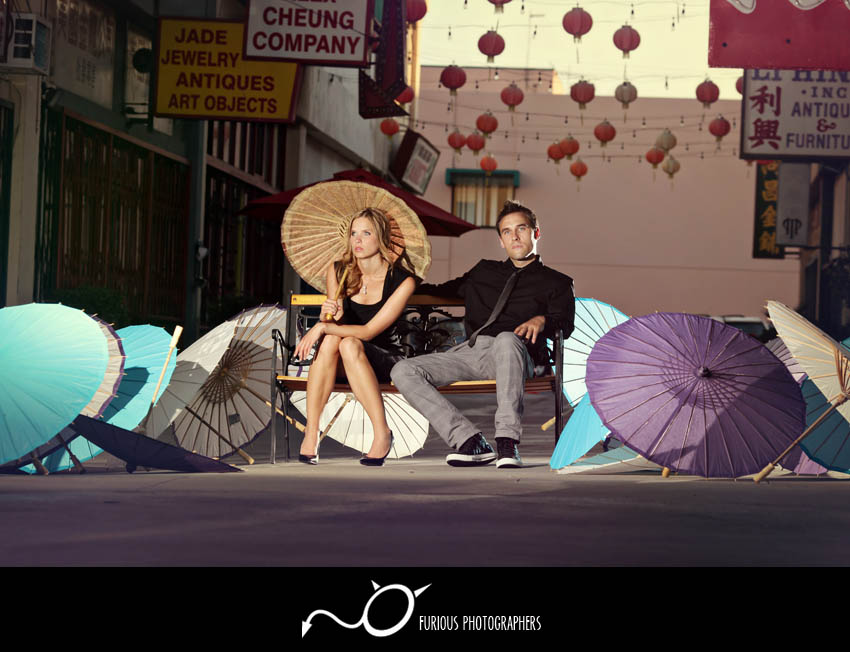 I just had to add this photo below when James and Phebe held the parasols up for the next pictures. I believe that behind the scene pictures add a lot of character and people will appreciate our work more if they saw the effort we put into every picture! 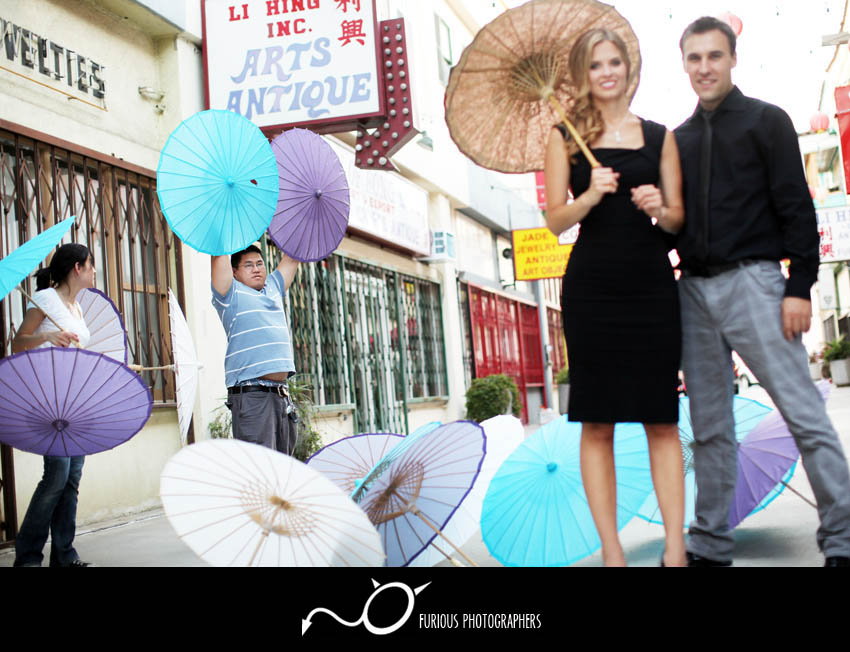 To conclude the edgy engagement session with the theme “umbrellas” in Los Angeles, we wrapped up the photo shoot with this final photograph. We had to take a few tries since the breeze did not pick up the parasols high enough on the initial runs. After a handful of attempts, this final photo was well worth the wait. 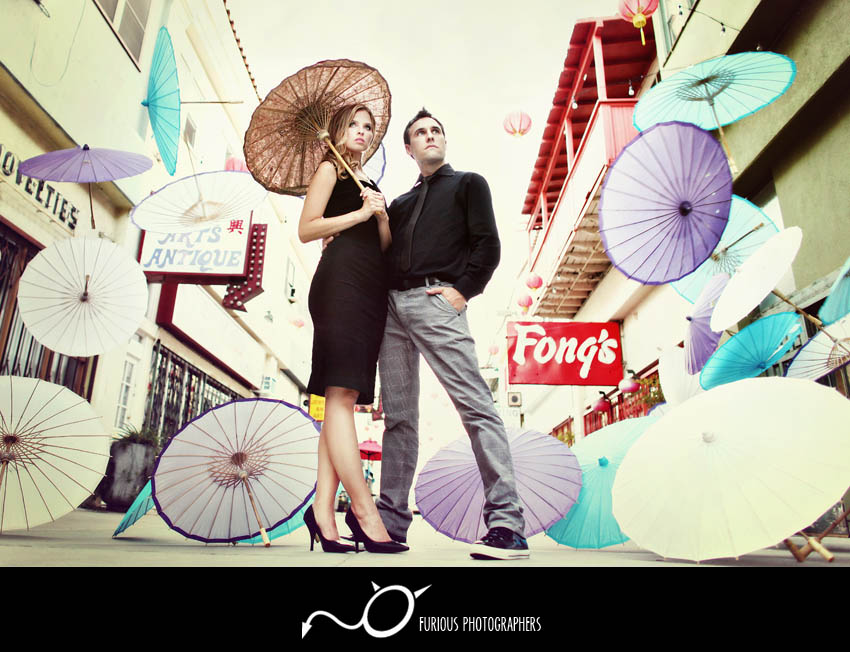 Of course, with all the work, the crew was treated to a nice Japanese dinner nearby in J-Town (Downtown Los Angeles) off 2nd and Alameda. 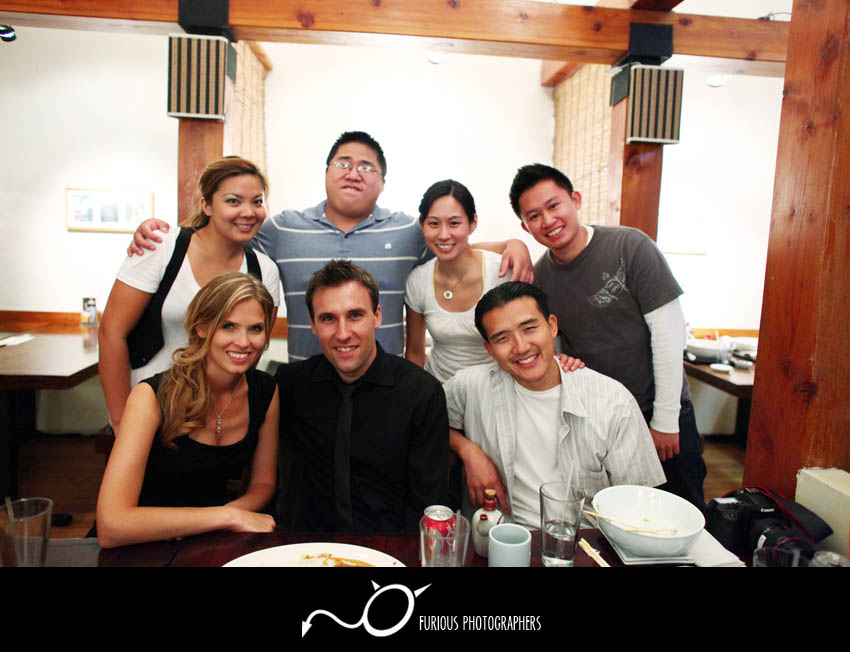 It is always a pleasure to be your photographer, Sandra and Holger! I cannot wait until your next visit from Germany and our next photo shoot with an even more exciting idea! Until then, we can just toss some ideas around.

p.s. – If you viewers have a theme for Sandra and Holger’s next crazy photo shoot, please comment below! I am sure they will be thrilled to read them.

Rock til’ the Wheels Fall Off | Renee and Glenn

Back to Summit House | Darlene & Justin